Myles Golden loved connecting people and leveraging his network to benefit others. He got to do that not only in his role as a career transition and development coach at Golden Career Strategies, but also as a long-time Rotarian, church member, and consummate networker.

Golden, who died in February 2017 at age 76, believed that people were good and really wanted to help each other, given a chance. He built a life and a career on those beliefs.

Born in Milledgeville, Ga., in 1941, Golden’s career as a coach arose from personal experience. Golden Career Strategies, the business he started and ran with his wife, Ann, was what Golden called his “encore career.” His first career was at office supply company Ivan Allen, where he went from sales to the president of a subsidiary over 35 years. In 1998, when Staples acquired Ivan Allen, Golden found himself out of a job in his mid-50s.

Golden went to a nationally regarded career placement firm for help in finding his next career. Career transition assistance then was not personal. “They took an hour to wipe your tears, make you a basic resume, pat you on the back, and say, ‘Good luck,’” said Deborah Hawkins, an integrative coach, and a friend and business associate of Golden.

Golden saw a better way. “Myles saw he could leverage his deep network to benefit people who were in transition,” Hawkins said. “He would give people the personal service he couldn’t find himself.”
From his frustrations with outsourcing after his career at Ivan Allen, Golden Career Strategies was born.

‘Anyone can put anything on a resume’

The first step in Golden’s career coaching was to conduct assessments, something that hadn’t been done for him. “Many people would come to him thinking they were all wrapped up,” Hawkins said. “Their world had ended. ‘I’ve been doing that job for 30 years; I can’t do anything else.’”

The assessments reminded clients that they were good at things. It opened their eyes to possibilities. It was, Hawkins said, the foundation that Golden’s success was built on.

The assessments also served to validate the resume. “Anyone can put anything on a resume,” Golden would say. By doing neutral assessments, Golden could help people build resumes that were powerful and real. It also helped Golden help them. “He could reach out to his incredible network and tell his client’s story and know he was telling the truth; he had the data to show it,” Hawkins said.

Golden’s greatest asset, though, was his network. He was a natural networker. “Myles loved connecting people,” said Pam Wessel, business relations director at Greenville Health System who coached and did business development at Golden Career Strategies for eight years. “He made connections between people even when there was no direct benefit to him.”

It was a practice Golden called “netweaving” — making connections between others, as opposed to “networking” for himself. The payoff was personal. “The most gratifying thing in his life was what he often referred to as the ‘emotional dividends’ he earned through helping others,” remembered Golden’s son, Greg, in his father’s eulogy.

“Myles was masterful at connections,” Hawkins said, “and he was always working behind the scenes to help others, especially his clients.”

Golden’s program to aid people in career transition was built around networking. After assessments to gain insight and boost confidence, the clients went through intensive, personal modules that involved coaching in resume writing, interviewing skills, and, of course, mastering networking.

“Myles had different ideas about how to do these things,” Hawkins said. “He didn’t see a resume as a list of accomplishments — it had to tell a compelling story.”

In the end, though, networking was key. “Myles saw our role as supplementing our client’s networking,” Wessel said. “Myles believed that many clients had let their networks wither over the course of a long career. We gave them the benefit of our network while helping them rebuild their own.”

Golden believed networking was something anyone could do, and it was never too late to start. “Start small, he would say,” Wessel said. “Talk to people, get to know their stories. Above all, never let the network down.”

Golden lived that rule. “We would go to a networking event nearly every night of the week,” Wessel remembered. “There were so many, I had to make a spreadsheet to keep up. Eventually, I said, ‘We have to publish this for people.”

Together, they did, and ConnectGreenville.com was born, another legacy Golden leaves behind that will continue, under Phil Yanov’s leadership, to aid others in their quests to connect. “It was a great thing that Myles and Pam did, and I’m happy to continue it because I think it helps people,” Yanov said.

Golden’s work as a coach and his humanitarian service touched thousands of lives, in Greenville and around the world. “He was a Greenville icon who left an amazing legacy,” Wessel said. “He was one of my favorite people.” 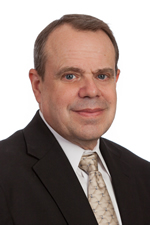 Steve Olson has broad technical and organizational management experience with real-world manufacturing, sales, and engineering experience.  He has managed diverse teams in strategic planning, team building, and conflict resolution to achieve organizational and individual success.  His career includes the development of new products and technologies for Fortune 100 firms, and he has held executive positions in McKechine Plastic Components and Chicago Miniature Lighting. His career has created a network of resources that is local, national, and global. Steve is an accomplished coach with a servant/leader methodology designed to support you throughout your transition.  With a career spanning four decades across North America with responsibilities in Central America and Asia, Steve applies interpersonal skills augmented by his business and life experience to assist you in arriving at your unique objectives and goals.

Steve has a B.A. from Metropolitan State University and a MA.TH from St. Leo University and is also an ordained Deacon in the Catholic Church. He and his family have lived in Simpsonville, SC, for over 20 years.

This website uses cookies to improve your experience while you navigate through the website. Out of these, the cookies that are categorized as necessary are stored on your browser as they are essential for the working of basic functionalities of the website. We also use third-party cookies that help us analyze and understand how you use this website. These cookies will be stored in your browser only with your consent. You also have the option to opt-out of these cookies. But opting out of some of these cookies may affect your browsing experience.
Necessary Always Enabled
Necessary cookies are absolutely essential for the website to function properly. This category only includes cookies that ensures basic functionalities and security features of the website. These cookies do not store any personal information.
Non-necessary
Any cookies that may not be particularly necessary for the website to function and is used specifically to collect user personal data via analytics, ads, other embedded contents are termed as non-necessary cookies. It is mandatory to procure user consent prior to running these cookies on your website.
SAVE & ACCEPT